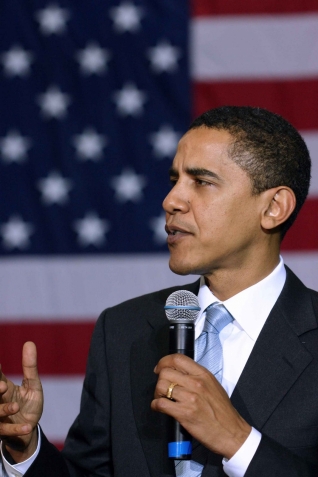 Obama is likely going to vote for the new FISA bill, eventhough it grants sweeping powers to the government AND grants retroactive immunity to telecomm corporations. Say it ain’t so, Barack! So I went to Barack’s webpage and there is nada regarding his stance on FISA. The silence speaks volumes. Compare the silence to what Obama said in January regarding a similar bill[1]:

I strongly oppose retroactive immunity in the FISA bill.

Ever since 9/11, this Administration has put forward a false choice between the liberties we cherish and the security we demand.

The FISA court works. The separation of power works. We can trace, track down and take out terrorists while ensuring that our actions are subject to vigorous oversight, and do not undermine the very laws and freedom that we are fighting to defend.

No one should get a free pass to violate the basic civil liberties of the American people - not the President of the United States, and not the telecommunications companies that fell in line with his warrantless surveillance program. We have to make clear the lines that cannot be crossed.

That is why I am co-sponsoring Senator Dodd’s amendment to remove the immunity provision. Secrecy must not trump accountability. We must show our citizens – and set an example to the world – that laws cannot be ignored when it is inconvenient.

A grassroots movement of Americans has pushed this issue to the forefront. You have come together across this country. You have called upon our leaders to adhere to the Constitution. You have sent a message to the halls of power that the American people will not permit the abuse of power – and demanded that we reclaim our core values by restoring the rule of law.

It’s time for Washington to hear your voices, and to act. I share your commitment to this cause, and will stand with you in the fights to come. And when I am President, the American people will once again be able to trust that their government will stand for justice, and will defend the liberties that we hold so dear as vigorously as we defend our security.

Obama knew what Progressives wanted to hear and he garnered enthusiastic support from them. It wasn’t just his talk about “hope” and “change” - but there was a clear subtext which declared “I am progressive!” But now that he’s secured the nomination are we starting to see a crack in a facade? Now that the race is between a right leaning and a left leaning person, is he shifting his position to appeal more to the center? Or worst of all, is he giving into the Republican framing that “national security” trumps everything? Obama received progressive support because he never gave into someone else’s framing the way Al Gore and John Kerry did. When Hillary lambasted him with political BS, Obama rose above and called her out on it. Why then is Obama seemingly incapable of or unwilling to doing that now? The NSA does not need sweeping powers in a new FISA act - they can already tap anybody’s line without a warrant - so long as they get a retroactive warrant. Obama should know this bill is bullshit. Why have we lost our champion? Obama, if you want to demobilize your base, you’re on a great start. I was going to donate money to Obama’s campaign, but there’s no way I’m going to give money to a backstabbing politician. Politico has great coverage here.