Dimmeria
The day after the election I emailed Dianne Feinstein requesting an inuguration ticket, and believe it or not, I actually got one. I don’t know if my constantly emailing her criticizing her support of anti-progressive policies helped at all, but at least it didn’t hurt. No, I still don’t like Dianne Feinstein any better. As far as I’m concerned she should resign in shame, or barring that the Democratic party should censure her. Of course, politicians being what they are, neither will happen. Overall, the Inauguration was an amazing event to attend. To sum it up in one word, it was an “experience”. The Inauguration both exceeded and fell short of my expectations. The inauguration ceremony started at 11:30 AM, the gates to the tickets-required area opened at 9:00 AM. My ticket entitled me to entrance to the eastern-most portion of the National Mall, just west of the Capitol Reflection Pool. On a normal day the trip from where I was staying to the National Mall would take about 20-30 minutes, depending on how often the trains were running. A friend of a friend, who was more “in the know” then I, wanted to be in DC proper at 6AM. As someone who cherishes my sleep I thought this was ridiculous. Still, understanding the need to leave early because of the crowds, I got to the nearest metro station around 7:15AM. When I arrived the metro platform was packed and every DC-bound train was completely full. In the span of 20 minutes maybe 5 people at my platform were able to force their way onto a train already packed with people. This was much worse than I expected. It became apparent to several of us that we could take one of the empty west-bound trains to the end of the line, in order to get onto an east-bound train before it was full - and that’s exactly what some people started doing. I egressed at the stop before the end of the line, and was able to get onboard - but sadly, some people were left behind. As the train travelled eastward, we passed station after station filled with masses of disappointed citizens. 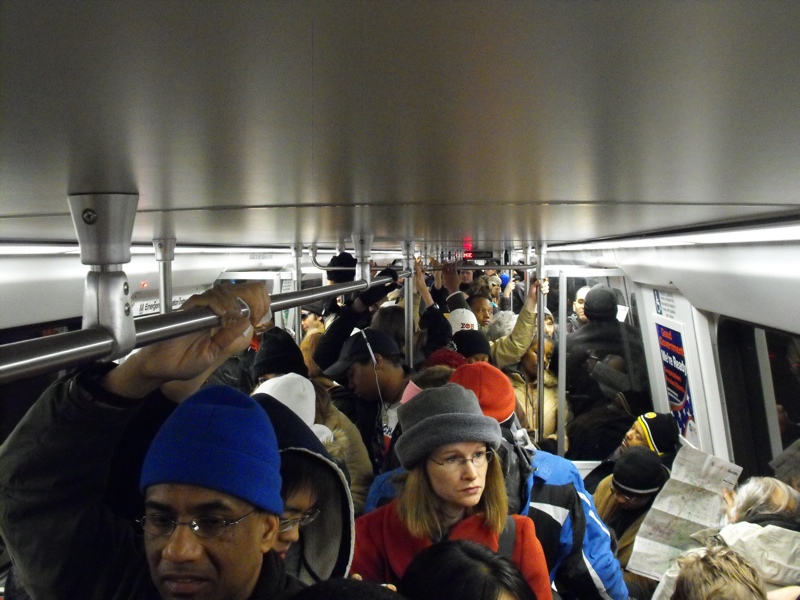 My full metro car.
To make the transportation situation dramatically worse, the train would stop for tens of minutes at stations and in between stations because there would be trains stopped ahead of ours. It turned out that since everyone was getting off at the 2 primary National Mall stations these 2 stations soon became overwhelmed. The metro exits could not handle this throughput, and would back up all the way back to the metro platform, meaning that people could not even exit their trains. With people unable to leave the door of their train, the train would be stuck - and as a result so would every train behind it - all the way to the end of the line. So not only could the trains not move fast enough to pick everyone up, but now they were made many times slower. I exited at the Faragut West station, a long walk from where I was supposed to be, because I was tired of being jam packed on a train with people and frustrated from the train constantly stopping. When I got out I was amazed at what I saw - a sea of people in front of me, all the way down the street, migrating to the National Mall. At this distance from the National Mall I did not expect to such large numbers of people.
The Washington Monument - about a mile west of the Capitol Building.
When I finally arrived near the silver ticket entrance, people were literally packed into the street like sardines, sidewalk to sidewalk, and they were not visibly moving. At this point I feared I had been robbed of my chance to view history, but resolved try to find a way in. There were no signs telling me where to go, and no staff directing ticket holders. I knew from the map that it must be in one direction. It seemed like half the people in the street-wide sardine can were also ticket holders. We pushed on together, some rude people pushing at our backs to try to wedge their way ahead. The street had been packed with non-ticket holders trying to reserve a spot on the street where they could view the capitol - completely understandable but completely inconvenient for ticket-holders. It was roughly 10:45 AM now. I had arranged to meet my friend in the silver-ticket area. When I arrived there was a sea of people in front of me, shoulder to should, ass to groin as far back as I could see and all the way to the left and right. I paced up and down a bit, but soon resigned myself to being alone for the ceremony. Silly thought though, since the last thing anybody was at the Inauguration was alone. The only bright side of being in the middle of such a massive crowd was that the sub-freezing temperatures and the even worse wind-chill were not as painful. I believe the weather report said it was 30F and 17F after wind-chill. I am not usually cold to the point of severe discomfort, but DC was really fracking cold!
This was sometimes my view of the inauguration - photo taken at eye level.
If only I were 6‘5” tall, I could see great (and obscure the view of everyone behind me). Very short people were unable to see almost anything.
At least one expectation I had from having a ticket was that I would have a clear, albeit distant, view of the ceremony. If only. I could barely see the Capitol Building, nor the jumbo-tron due to trees having been untrimmed and inconveniently placed for such a large event. There was a bit of grumbling that our tickets were worthless. I found out later that some people in the National Mall were more unlucky - some people couldn’t see OR hear the ceremony. And then of course, there were the people still standing on a metro platform, waiting for a train that wasn’t full… Us lucky plebs who got a ticket got silver tickets. People with fame and/or political connections got orange or blue tickets (actual seats up close) - and even some of these (including a friend of mine) didn’t get in. The rest of the plebs were stuck in the National Mall, without enough jumbo-trons and speakers for everyone to see and hear. 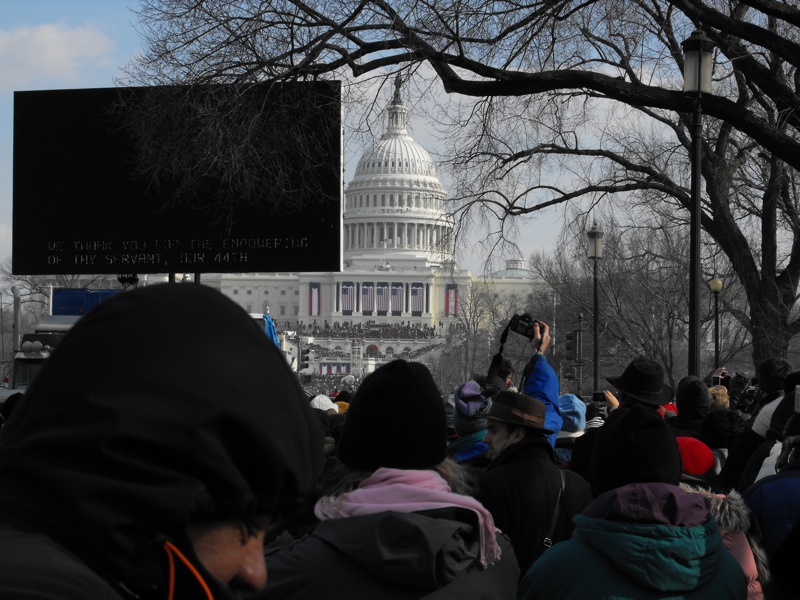 After Obama’s speech I was able to get closer. 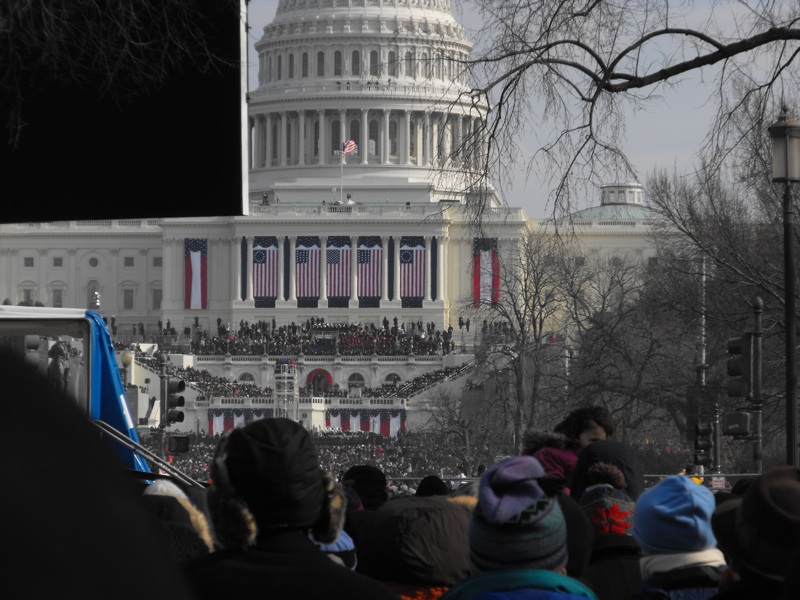 A zoomed-in view from the silver ticket area.
The ceremony was exactly how you saw it on TV - with one important exception. When George W. Bush came on the jumbo-tron, nearly 2 million people simultaneously booed him. After 8 years of feeling powerless to stop his evil and incompetence, this was a majorly therapeutic moment. I hear that all mainstream media censored the boo-ing, except NPR and the BBC who mentioned it happened. Trust me, it was awesome. For once George W. Bush was forced to hear what many Americans think about him. Although I hear the news media only showed Blacks attending the ceremony, and I only witnessed Blacks being interviewed by cameras, there were lots of White and Brown people there too. I understand that this day was more personally significant to Blacks, but it was incredibly meaningful for the rest of us too. Best of all there was almost complete racial harmony. I experienced zero racial tension, and so did almost everyone I spoke with - color didn’t matter and it was wonderfully refreshing. I know this isn’t true of the country as a whole, but I hope this is a sign of things to come. 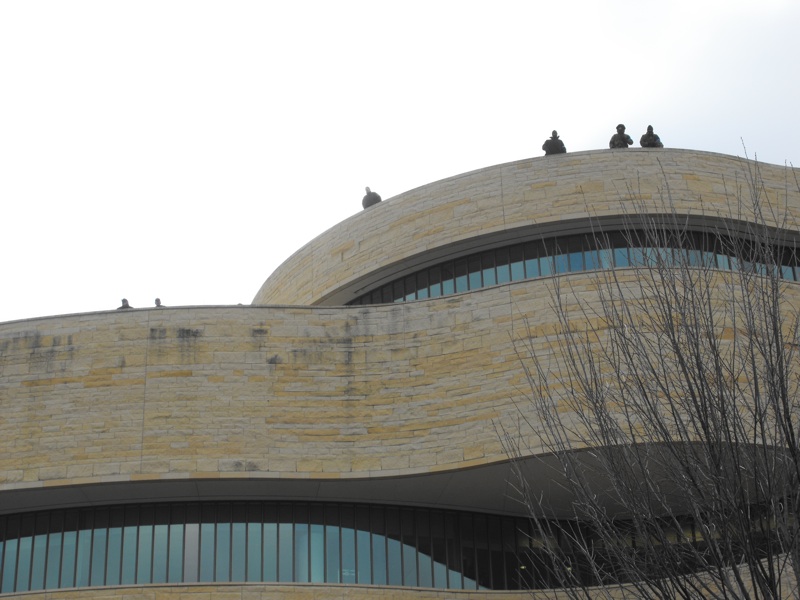 Counter-sniper spotters were all over every rooftop. 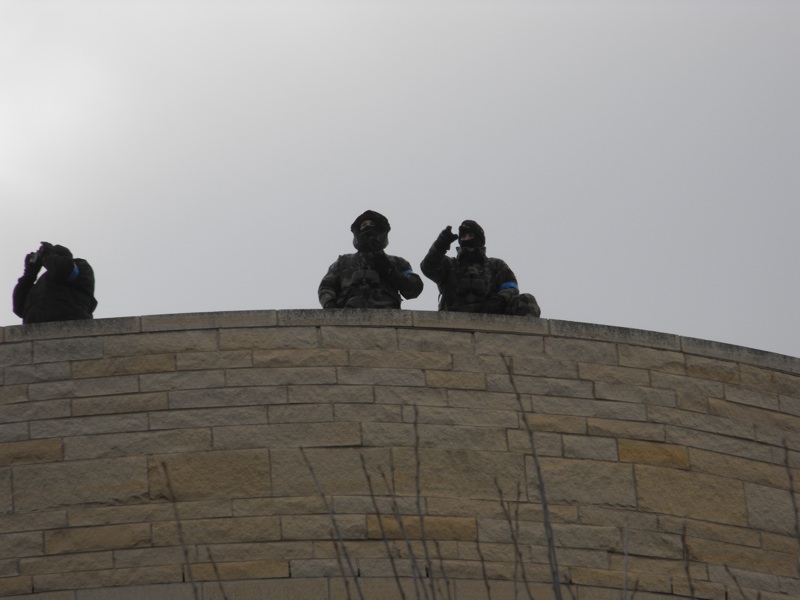 I couldn’t see any counter-sniper snipers from the ground though.