This kind of he-said she-said psuedo-journalist drivel annoys me. How about some objective context for once? In an article from CNN about religious response to Stephen Hawking’s latest book:

In his new book “The Grand Design,” Britain’s most famous scientist says that given the existence of gravity, “the universe can and will create itself from nothing,” according to an excerpt published in The Times of London.

“Spontaneous creation is the reason why there is something rather than nothing, why the universe exists, why we exist,” he wrote. “It is not necessary to invoke God to light the blue touch paper [fuse] and set the universe going.”

But the head of the Church of England, the Archbishop of Canterbury Dr. Rowan Williams, told the Times that “physics on its own will not settle the question of why there is something rather than nothing.”

Apparently Rowan Williams did not read the previous paragraph, or he was quoted out of context, or he is retarded. The author would have us believe that Rowan Williams is retarded, since it sounds like he’s telling Stephen Hawking that Hawking’s got physics wrong. To be fair, it’s really just a difference of contexts. I’m sure Stephen Hawking does not attempt to explain what created the system that creates something from nothing. For example, physics still cannot answer why the cosmological constants are what they are. Hawking has added a layer of abstraction to the creation of the universe, but he still has not given a scientific ultimate cause for the existence of the universe.

But it is funny that religious leaders feel threatened every time science encroaches on their God of the Gaps, while simultaneously crying complete cognitive independence from Science.

Some of the other quotes were great:

Williams’ comments were supported by leaders from across the religious spectrum in Britain. Writing in the Times, Chief Rabbi Jonathan Sacks said: “Science is about explanation. Religion is about interpretation … The Bible simply isn’t interested in how the Universe came into being.”

Yeah, if you ignore that very inconvenient book Genesis. But if you’re going to start chopping out stupid parts of the Bible, why stop with Genesis?

Ibrahim Mogra, an imam and committee chairman at the Muslim Council of Britain, was also quoted by the Times as saying: “If we look at the Universe and all that has been created, it indicates that somebody has been here to bring it into existence. That somebody is the almighty conqueror.”

Does he expect an apology from Stephen Hawking with that vacuous tripe? Did Kirk Cameron’s banana convince him? And if you automatically were always-existent, omnipotent, and omniscient, that doesn’t make you much of a conqueror, does it? Then there’s another quote trying to assert independent realms for science and religion:

“Science provides us with a wonderful narrative as to how [existence] may happen, but theology addresses the meaning of the narrative,” he added.

If the realms are separate, why does this article exist? Why do religious leaders feel threatened every time a scientist fills in a gap? The answer is that these religious leaders do not want to admit that belief in their God actually requires an unsexy Kirkegaardian leap of faith. Religious belief has been on the decline over the previous centuries thanks mostly to science filling in the gaps. If religion loses the creation argument too, there will be even less “evidence” religious leaders can point to. Their God would start looking even more like the unprovable but not-falsifiable Flying Spaghetti Monster, who for some reason has not caught on as a legitimate deity among mainstream Christians, despite evidence of FSM’s existence (evidence: [1] [2] [3]). 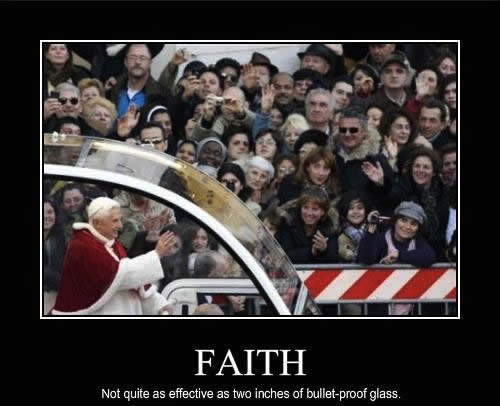