So Obama’s Presidency thus far has been less substantive than the “Hope and Change” that we had been promised. Why am I voting for him, again?

Well, the GOP made the choice easy. “Not the Republican” is the obvious choice, again. 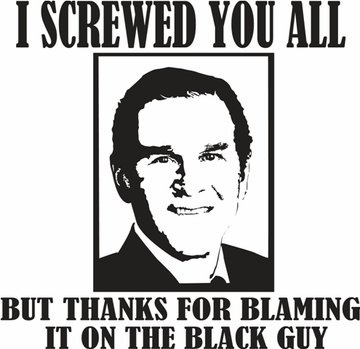 Under George W Bush and a Republican controlled Congress (until 2007), banks were encouraged to make lending easier while W put lobbyists in charge of regulatory bodies (since he couldn’t change the laws, he’d just stop enforcing them). Republicans believed that the free market would smoothly regulate itself and that government need not interfere. The market did what poorly regulated markets always do - it crashed. Curious and curiouser, the GOP cites too much regulation as the cause of the crash. Because these days, being a Republican means turning a blind eye to evidence (also see: global warming, rising sea levels, evolution, women’s reproductive systems…). Democrats deserve serious demerits too: they either were ignorant of what was happening or they had too little backbone to stop it. But the point is Republicans crashed the economy, and they weren’t courageous enough, or were perhaps too ideological, to admit or recognize what went wrong.

Faux News and GOP buddies were blaming Obama for the bad economy 8 days into his presidency and have never stopped. W started, and could not end, two optional wars, massively cut taxes for the rich, and gave away handouts to pharmaceutical companies in the form of an add-on to medicare. So when the economy tanked and tax revenue plummetted it’s understandable that the national debt balloons; it was already ballooning under W well before the recession started.

To his credit, Obama did try to work with Republicans on every issue he approached. The trouble with Obama’s 2008 plan to change Washington is that to change a relationship it takes two. As evidenced by Senate Minority Leader Mitch McConnel, the GOP’s top priority was to make Obama a one-term President.

He did not say the number one priority was to fix the economy, reduce the national debt, or stop the rising cost of health care. He said the number one priority was to torpedo Obama. And that’s exactly what they’ve done. Whether that means blocking economy-and-country-fixing infrastructure spending or holding the economy hostage to grand stand about the national debt. Here is an apt metaphor for the debt ceiling debate (though I hate it when the GOP over-simplifies the national budget and compares it to a family’s). Here’s what happened: Congress racked up a bunch of debt on their credit card, and Republicans were threatening to not pay the bill. We lost $1.3 billion as a result. If Republicans really cared about the massive national debt they would have done two things differently:

The GOP is willing to sink the ship of state to make the captain look bad.

We Actually Have No Clue Where Romney Stands

Mitt Romney has taken every side of most issues. My favorite one was during the town-hall debate Romney said both that if elected President he would create 12 million new jobs, and also that government does not create jobs. It’s impossible to know what he would actually do if he became President. He is a true wild card.

Although Obama is not perfect, all things considered I think he’s been a pretty good President. He’s made good, thoughtful decisions on average and, despite most claims, Congress is the primary branch of government responsible for fixing the economy - not the President. He’s smart, calm, diplomatic, yet tough. He did get Bin Laden. He did majorly improve health care access for Americans, even if half of them don’t realize it. He’s made huge improvements towards equality for all sexual orientations. He does show respect to Republicans and he’s willing to compromise with them, even when they don’t reciprocate. He hasn’t done a lick towards reducing the national debt, but that is perhaps impossible during a recession.

I think these ideas of Romney’s deserve serious conversation, if not praise. As I said above, the only problem is that I don’t know if Romney actually believes these or if he’s just saying them to get elected.

There are several other positions of Romney’s that I like, but they are ones that Obama shares. But only contrast is useful here so I won’t mention them specifically.

So it strikes me as really disappointing that America in 2010, and is poised to in 2012, rewards the political party that deserves the most blame for the problems we have today. Don’t let the GOP manipulate us. Vote Democrat until the GOP adds integrity back to their platform (and real fiscal responsibility, intelligent regulation, and science would be nice too).